Windows Server 2012 captures the experience Microsoft has gained from building and operating public clouds to deliver a highly dynamic, available, and cost-effective server platform for your datacenter and your private cloud. It offers businesses and hosting providers a scalable, dynamic, and multitenant-aware cloud infrastructure that connects more securely across premises and allows IT to respond to business needs faster and more efficiently. Windows Server 2012 is an open, scalable, and elastic web and application platform. For distributed and mobile workforces, Windows Server 2012 empowers IT to help ensure people’s access to their personalized work environment from virtually anywhere. Whether you are an enterprise, a small or medium-sized business, or a hosting provider, Windows Server 2012 will help you cloud optimize your IT.

“Original Equipment Manufacturer". OEM software is sold directly to the computer manufacturer, or is distributed for smaller system integrators and system builder hobbyists for “clone” or no-name computers (to end user like you). OEM versions come with only an electronic help manual, which is built-in to the software or a small getting-started manual. The software itself contains the same programs as the Retail Box version, except the Retail Box version normally comes with a small printed manual & with fancy retail box. Beside, OEM Software does not included Microsoft free tech support since it's intent for user with in-depth knowledge to install operating system. OEM Microsoft software include a COA, which is a Certificate Of Authenticity label or sticker from the manufacturer, plus key code for you to key in during installation, and for your system to be activated/registed with Microsoft in order to receive Windows Update Such as Internet Explorer 7, Windows Defender, Media Player 11, and so on.

You may be able to upgrade to Server Standard 2012 If one of the following are currently installed:

Server 2012 is the original release while Server 2012 R2 is the second release. R2 has additional features, updates, and security patches. Some of the key new features of Server 2012 R2 are Storage Tiering, Storage Pinning, Desired State Configuration, and Work folders. 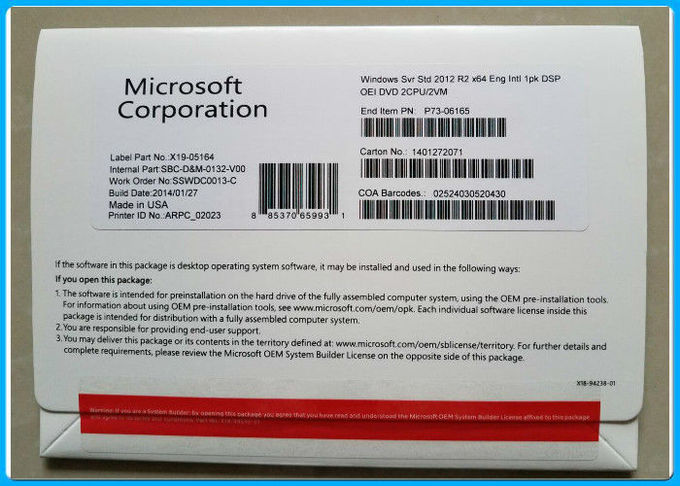